Technology: More than a tool, a new skill

I’m dumping another technology phrase that I think its time has passed by. A few years ago I stopped using the phrase 21st Century blah, blah, blah. You name it we were calling everything 21st Century. I haven’t missed that phrase in my vocabulary as I believe it is just the way things should be now that we’re 11 years into it. I was thinking about this phrase again the other day as I was talking to seniors…who were born around 1994 and who started their official schooling sometime around 2001. Why are we still using the phrase 21st Century this and that when for our students….it’s always been the 21st Century. It just is their world. That brings me to the next phrase that is going to leave my vocabulary. The notion that

Technology is just a tool

I have heard this said way too often-to the point, I believe, that some educators are using it to hide behind when it comes to using technology in their classrooms.

Is Technology a tool? Yes.

Technology is a Skill

The problem is you need to have the skills to use a tool before you can use it propertly and have it effect your life in positive ways.

A pencil is just a tool, but until you learn the skill to hold it correctly it doesn’t do you much good.

Viewing technology just as a tool never allows us to get past the substitute stage of technology innovation. A stage were we just continue to subsitute one tool for the next. Quil and ink for pen and paper for word processing. The skill of writing an essay remains the same the tool just changes. No new real skills are needed when we subsitute one technology for the next. 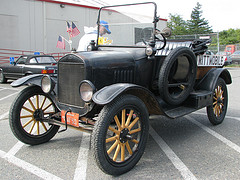 You buy a new car and it works just like your old car. Sure buttons are in different places, newer, faster, easier….but at the end of the day the same skills you had driving your old car fit into the new car nicely (which is why we haven’t seen any radical change in car design since…..hmmm…the Model T).

If we view technology as a skill then it allows us to look at what needs to be taught and understood by a generation that is growing up with it. The skill of evaluating digital open content, the skill of organizing your digital resources. The skill of creating graphics. The skill of digital content design and web design. If you are looking for a good starting place the NETs for Students is a pretty good place to begin.

Technology skills in many schools are not valued and I think it is due in part to this notion that technology is just a tool. There might have been a time when it was just a tool, but it’s a life skill today. A skill that all students should learn, that should be embedded in all their classes, and should be more important than the content that the teacher took off the web to begin with.

We spend way too much time finding “stuff” for kids on the web and not enough time teaching them how to find it themselves. Why?

I can make sound come out of a flute (tool) but until I’m actually taught how to do it properly (skill) it’s going to be a horrible sound.

Now, I don’t want you to think that these skills I’m talking about are program based. I get asked quite often about when should kids learn Microsoft Word or when should we be teaching them Microsoft PowerPoint. Skills tied to specific tools do not need to be taught. Much like when you get a new car you can sit in the drivers seat for a few minutes have a look around, turn some knobs, and you’re ready to go. Progams are much the same way. Give kids 10 to 15 minutes with a program and they’ll figure out all the button stuff, or at least enough to finish the task.

The skills I’m talking about are skills of organization, of building research systems, and meta-cognition. Skills that go beyond the tools and deep into the learning process.

So that’s if for me, no more technology is JUST a tool. It’s not….we’ve moved beyond the tool and expect a whole lot more from all this stuff. We expect kids to learn with it and from it and in order to do that, we need to be teaching them skills that allow them to learn.