A Study on how laptops hinder learning made the front page of The International Educator newspaper that comes out monthly to overseas educators and schools.

Jason Welker wrote a great article at U Tech Tips about it.

First of all, to call this a “study” of the use of laptops in
schools is inappropriate. A study with a sample size of TWO classes,
yes, but its findings should be understood as applying only two these
two particular classes, which were large lecture-style university
classes. This particular university’s laptop “program” is described as
follows:

“Students were told at the beginning of the course that
they could bring their laptops to class to take notes if they wanted
to, but that they would never need their laptops.” (italics added)

Any school thinking of implementing a laptop program should be
careful NOT to emulate this university’s particular approach. What’s
the result when students are encouraged to use laptops, but told they
would “never need them”? Here’s what one professor observed:

“‘You’d sit and watch the students, and wonder, ‘What
are they doing with their laptops?’ You’d walk by other classes and see
everybody playing solitaire. I wanted to know, ‘Is this a problem?,”‘
said Fried, a psychology professor at Winona State.

The laptop users reported in weekly surveys that they did other
things other than take notes for an average of 17 minutes out of each
75-minute class.

Checking e-mail during the lectures was the most common distraction;
81 per cent admitted to this transgression compared to 68 per cent
reporting that they used instant messaging. Forty-three per cent
reported surfing the Internet, while 25 per cent reported playing
games.”

It should be no surprise that students spent most of their time with
their laptops surfing the net, chatting and playing games, given that
professors apparently made no attempt to integrate the computers into
their instruction. Obviously this represents a failure not of “laptop
programs” in general, rather of this university’s failure to implement
a program effectively. The university’s failure lies in the simple fact
that professors view the laptop as a fancy tool for taking notes,
rather than what it is: a tool for communication, collaboration, and
innovative research.

Laptop programs do not “hinder learning”, BAD laptop programs hinder
learning. The study discussed in this article focuses on one, very bad laptop program at a university that does not understand the role technology should play in education. 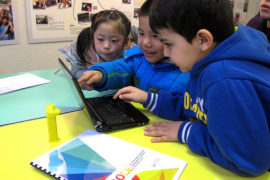