Last night I stood and watched as you became the 44th President of the United States of America. It was a gathering of many excited American expats in Bangkok, Thailand. 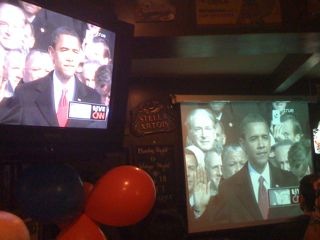 My wife and I moved overseas in August of 2002 to Yanbu, Saudi Arabia. A small town 3 hours north of Jeddah. When we arrived in August to our little western compound, there was a wooden drop bar that separated the compound from the deserts of Saudi Arabia. It was much like a gated community you can find in many places in America.

When we left three years later in 2005, the scene was quite different. To enter our home, we had to pass through three armed check points, a cement barrier weave, a 6 inch thick steel gate, and two drop down barriers, along with a bomb searching area.

From those who were in Yanbu before us, we heard of good times within the Kingdom. Times of celebrations together, of Christmas parades and Thanksgiving Turkey. Times when being an American did not mean fearing for one’s life and in some cases even claiming Canadian citizenship just to avoid being hassled.

For the past seven years, living overseas when people ask us where we were from, both my wife and I hesitate before saying “America”. It was almost a feeling of being ashamed. Ashamed that our country was viewed so poorly by so many in the world.

We have traveled the world, we have friends from Palestine to South Africa, from China to India and for the first time in seven years, last night I felt as though being an American wasn’t a bad thing, that it wasn’t something I needed to be ashamed of any longer.

I thank you for not only speaking to the American people but understanding that your stage was much larger. For the first time in seven years, my friends from other countries talk with respect about America. The taxi driver, when asking where I am from, gives me a thumbs up when I tell him I’m American.

Mr. President. I know the world is more complicated than I will ever understand. But please know from my little spot on this planet here in Bangkok, Thailand, that I appreciate you putting hope back in the hearts of not just Americans, but of humans everywhere no matter where the political boundaries say they are from. Please know that you have already taken steps to mend the wounds of wars, to heal relationships, and bring hope to humanity with your words, your compassion, and your desire for change.