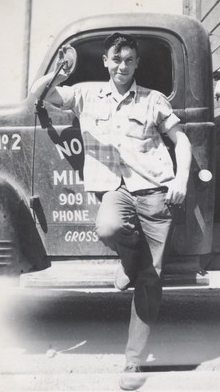 He sits there next to my mom and dad in the stands dressed the same no matter the weather. Flannel shirt, baseball cap, and khaki colored pants. He makes it to a couple of games a year when the farm is at its slowest. As I glance up from the bullpen he’s once again found someone he knows to talk to. No matter where he goes in this state he’ll know somebody.

It’s no surprise really, he’s been part of his community for a long time. He made the family name recognized in Spokane. As far back as I can remember he’s been selling his produce to local stores. The “Valley Fresh” or “Grown Locally” signs found in the supermarket could have just as easily read “Grown by Elmer Utecht”.

He’s always been a farmer and always well be.

But today he takes time out of the fields and makes the 400 mile drive with my parents to watch me sit here in the bullpen waiting to see if I’ll play. He wears the OC hat I bought him last year with pride. His grandson playing baseball in college…he couldn’t be prouder.

The game has changed a lot since he was a kid. Back then you listened huddled around a radio, you played in the field with a stick and anything remotely round, and you bought baseball cards for the gum. Gloves didn’t cost $100s of dollars. A bat was anything that felt right in your hand, and major leaguers played because they loved the game.There was no free-agency, no talk of salary caps or steroid use.

Time has changed baseball in so many ways yet the basics of the game, the reason why I love it so much, remain the same. They say this game is 90% mental and 10% physical and that it’s the hardest thing to do in all sports: Hit a round ball with a round bat square. It’s the only sport where if you are successful just 35% of the time you go to the hall of fame. And if you hit safely 40% of the time…well….I’m not sure what would happen as it hasn’t been done for a long time.

He loves sports and although today I didn’t get to play he’ll have some comment about the umpires. He always does. It’s either the strike zone, or a close call at a base, but some how some way he’ll find something to talk about. I just smile as we go out to dinner and he recaps the game for me talking about different players, different plays, and of course the umps. 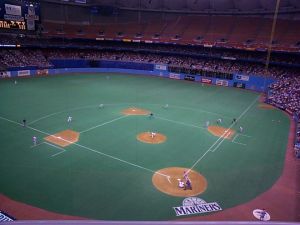 As we talk over dinner I remember the time we all went to the King Dome to watch the Mariners play. I had to be around 10 then and it was the first time for both of use to be in the King Dome and watching the Mariners live. Of course he wore the same then as he does now. Flannel shirt, baseball cap, and khaki colored pants. I’m not sure which one of us was more awe struck being in the King Dome. A place we’d seen on TV so many times. He rarely missed a game on the television and when he’d come over for dinner he’d always let us know the game was on. He loved all sports. No matter the season he had something to comment on, something to talk about.

This year as a new baseball season begins I’ll be thinking of my grandfather and the times we shared around this game. Whether talking about Mariner players, my college days, or my time in high school, he was always willing to talk. This year he gets to watch the game from high above, and I’m sure from time to time umpires will hear him in their ears.

Thanks gramps for the memories and let another baseball season begin.