’15 The Year of Wearable

Each year I like to try and predict what might be the technology that affects us both in our daily lives as well as education. Predicting the future is fun…if you’re right people think you’re amazing….if you are wrong…nobody really cares. 🙂

Here’s my other predictions….I’ll let you decide if I’m any good at it.

2008: The Year of the “Live Web (Ustream.tv and other services take off)

2011: The Year of the QR Code (These little buggers start showing up everywhere)

2012: Mobile and Integration (Chromebooks, iPads, laptops, tablets, phablets, phones…yeah the list goes on and on)

As I wrote a few weeks back, I do think we are in a pause at the moment and 2014 will probably be the last year of it before we start up that next big adoption curve of wearable technology.

Yes…the pause is over 2015 is here, wearable is here and becoming mainstream. Between things like Fitbit and watches wearable is only getting better, cheaper and has a real place, I think, in education starting this year.

What I am most interested in, and what I feel has the greatest benefit to education, is the health data that these devices help track for people. That’s where wearable is going to start and what it will disrupt and I think there is some huge benefits to the health curriculum in schools.

A class set of the cheapest fitbit for example would cost roughly $3000 (though I bet schools can do better). What if we were to give these to students to help them better understand their personal health? Think of the data analysis that could be taught in Math class as well analyzing personal data, whole class data, whole grade level data, and whole school data. All of a sudden the “fun run” the PTA puts on has a whole new curriculum meaning to it.

Also there is a social element to health I really want to explore with wearable. We know social plays a key part in motivation. Especially during the middle school years. What kind of effect could we have on student health by connecting classes socially around health? Could a kind of “positive peer pressure” have an effect on both the short term and the long term health of students?

Health and exercise is a personal thing and we know that forming good health habits young leads to good health habits later in life. I learned to take my own heart rate in middle school and think we need to still teach that…..but at the same time a click of my watch (Moto 360) gives me up to the minute stats on my “Heart activity” today. If I’ve been inactive for too long I get a gentle reminder to maybe go for a walk, get up and move around, or my RunKeeper app reminds me I haven’t ran in 3 days. The new water drinking app Drink Well I installed now gives me nudges via my watch to remind me that I need to drink water. Using research that it’s better to drink small amounts of water throughout the day rather than large amounts at one time…can this app help me: sleep better, be more productive, be in better all-around health all because I’m drinking enough water? We’ll see. 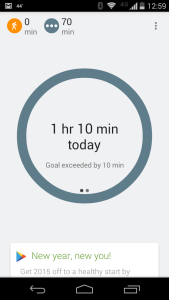 Then there is sleep tracking. The fitbit is great at this (I don’t have one but know many that do) and how can this information help inform students about their lives. High School teachers and counselors are constantly on students to get enough sleep. What if we could track that with kids, show them that yeah…you got 4 hours of sleep last night and now you’re not functioning well in Math class…gee…I wonder why? We help them understand not only the data but themselves and show them the importance of health and the new data we all have available to us.

Health curriculums are already trending in this direction. Moving to health/holistic based approaches and away from being sports and games centered. Not that sports and games are bad…anything that helps us move and be active is great…but the curriculum is already leaning in a way to help students form good healthy habits later in life by exercising and eating right. This technology I feel has real potential to take health curriculum to a new level.

I’m running an experiment of my own around this. For Christmas my good friend’s 11 year old daughter got her first cell phone (not saying who bought it for her but it could have been me). When she opened it her eyes went wide and she started jumping up and down on the chair…. “I feel I need to go outside and scream!”. I spent some time with her setting up her new phone and one of the things I had her download was the Google Fit app as well as RunKeeper. Her mom, my wife and I all use it to track our own running. So we set her up with an account and become her “friend” within the app. Everytime we run she’s notified that we have completed a run. Everytime she runs we’re notified of it. She can give us likes and comments and we can do the same for her. Even though we don’t live in the same city we can encourage each other in running and being healthy. RunKeeper syncs with Google Fit and Google Fit also will track her steps when walking and I showed her how she can add other activities. Although “recess” isn’t an activity within Google Fit that you can add we talked about what activities might best mirror what she does during recess. I wish there was a way to share your Google Fit stats and make that social…there isn’t (that I know of) at this time so we’ll see if she continues to use it and adds her activities to it. Of course she’s 11 and what she really wants to do is download all the games she wants to play on her new phone. Which is fine…that’s part of the process but I’m really hoping in my secret experiment that she starts to see being healthy is something we do as adults and how the technology can help us help each other.

So PE/Health teachers….if you have room in your budget this coming year for these little devices I really think there is something here to explore….and if you do….please let me know about it. I’m really interested to see if these wearable devices can help to change/enhance the health curriculum in our schools.