Just over 24 hours off the plane from the most amazing trip to Tanzania. As my wife and I prepare to transition back to life in America in June, we figured one last fantastic trip to Africa was in the cards….so off to Tanzania we went.

Jumping at the Summit

I’m proud to say that all four of us in our group made it to the summit some 5,895 meters (19,340 feet) above mean sea level. It was one of the most mentally challenging things I have ever done. Physically it wasn’t that hard of a 5 day hike to the summit, but the mental aspect on summit day of walking for 6 1/2 hours in the dark (leave at midnight to summit at sunrise at 6:30ish) covering some 1200 meters (3,937 feet) was by far the hardest part. As the oxygen thins out you need to stop and rest more frequently….but it is windy and freezing temperatures mean you don’t want to stop as you instantly get cold. You learn a lot about yourself on a journey like this and at some stage or another on the trip, all four of us had to push through mental or physical pain.

On a technology note….I was looking forward to being disconnected for most of this trip and that happened…but I wasn’t expecting our guides and porters to be totally connected the whole time. Each time we would make camp the guides and porters would go on a high rock or a specific ledge, whip out their cell phones and call home. Yes…..even at the summit of Kilimanjaro in the middle of Africa there is a cell signal. Both my wife and I took out our phones and had them connect just to verify. We talk about how connected of a world we live in that we need to get away from technology at times….but can you really? It’s always there, it’s just a part of our world……we better get use to it.

Safari in the Serengeti

Next up was five days in the Southern Serengeti and the Ngorongoro Conservation Area. The animal migration for the wet season had all the animals in the south where the land was green and rich with food. Over 1 million Wildebeest and 200,000 Zebras had migrated south bringing with them lions, cheetahs, elephants, giraffes and a host of birds. It was fantastic to stay in tents at night with buffalo eating outside and the sound of male lions grunting and roaring some 500 meters away preparing for a nightly hunt.

I don’t talk politics on this blog but the observations I made while in Tanzania as well as the rest of my travels the past ten years has me wanting to reflect on what I have come to understand and notice about the world we live in.

The American President is probably the only leader in the world, that no matter what country you are in everyone knows who they are. Most conversations go like this

“OBAMA!” holding up their thumb in a good-job sort of way

This has been played out countless times in countless countries over the last four years and is exactly opposite to the response we received the previous six years before that.

The American President is held to a different standard, in places like Thailand, Tanzania, Cambodia, Laos, Vietnam, etc. I wonder if it has to do with the level of corruption in their own political systems and they see the American system as not being corrupted….it has its faults for sure…but corruption at the level it is in these other countries….not quite. 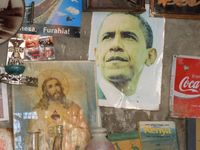 obama Picture in a Shop

Tanzania however was the first place I have visited that took this love for President Obama to a new level.

On one occasion, one of our guides had his cell phone ring tone set to President Obama’s speech to the muslim world in 2009. I asked him about it and he has different parts of different Obama speeches set as ring tones on his cell phone. He claims to have listend to all of Obama’s big speeches and loves to hear him speak.

Everywhere we went in Tanzania there were Obama posters, Obama ’08 bumper stickers, and even Obama t-shirts…we saw all this in Zanzibar as well where 97% of the population is muslim. 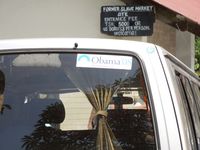 Whether we like it or not we live in a global world where America and its president are still seen as powerful figures in much of the developing world. People around the world care who we elect as our leader. It impacts their lives too…one person even said that he felt the rest of the world should also get some electoral votes, because it directly influences their lives as well!

As an American living overseas I can honestly say that it has been easier to live overseas the last four years than the previous six. The feeling towards America and Americans has changed. All of this of course is just my opinion and my experience….take it only as that.

In the end it was a great 20 days almost completely disconnected. Other than the occasional Facebook update to let family and friends know we were still alive I lived offline and enjoyed every minute of it.

I welcomed in 2012 standing on the beaches of Zanzibar.

Looking forward to what the New Year will bring!