Last Friday I had the pleasure of Skyping into a school in Singapore to talk about my TEDx Talk I did back in September. The principal showed it to his staff and then invited me in via Skype to answer questions.

I got into a conversation with one teachers about whether I believed that teachers would be replaced by machines. That, according to him, teaching is the second oldest profession in the world behind prostitution and that as long as we have been “human” there have always been teachers and no machine will ever replace that.

I stopped for a moment, smiles and then said something along these lines: 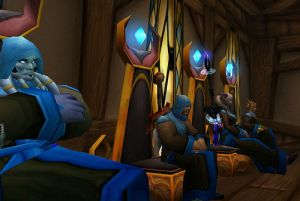 I agree with you…we’re not going to be replaced by machines, but individual teachers will, I believe, be replaced by communities of learners. In those communities everyone will be a teacher and everyone will be a learner. We might not even distinguish between them. Once students and schools figure out they can learn, what they want to learn, when they want to learn, in always on, always supporting communities then the day of the stand and teach teacher is over. We’re already seeing kids form these communities. There isn’t a video game created today that does not help support a community around it. In fact video game makers have the right approach. You create something really difficult…you let people go at it for awhile trying to solve the problem and then you give a “secret hint” or a “cheat”. Which was built into the game to help hold peoples attention and to help the community get stronger. Everyone sharing cheats, secrets, and talking about the game is a learning community. There are teachers, there are learners, but nobody identifies themselves as such because they are learning something they are passionate about and honestly nobody cares what your age is, where you’re from or what level you’re stuck on. They’re just there to help and learn.

Sure not every subject a student takes in school is going to be their passion (although I think we should get there). But that’s not to say that students still would not choose, if given the choice, to join the community they want to learn from. Who says that this teacher and this group of kids that you are tied to physically is your group? Is your best learning community? They might be, but that teacher in Beijing, or Iowa, or Germany might be a great person to have in your community as well, and what about that student from Inda who is really passionate about this specific topic….why wouldn’t you want her in your community to learn from and with as well?

We have the tools….it’s the Internet. All we need is a switch. Maybe University of the People is that switch. Once this generation, or their kids generation figures out that school can be just like that community they have on the Xbox…..then you, the individual teacher will be replaced by a community.